In this incredibly poignant year, 100 years since the end of World War One, a number of stunning coins have been issued across the world to pay tribute to those who lost their lives in the fight for freedom. 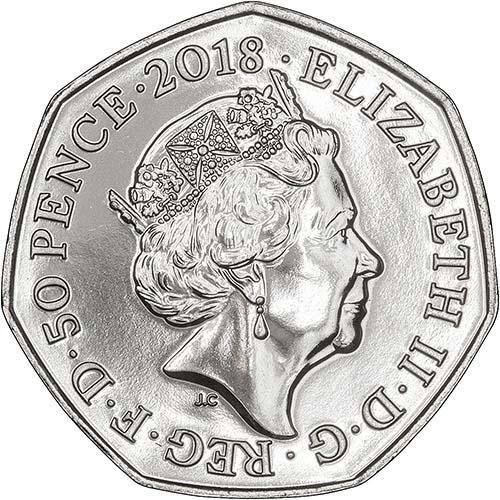 Over the year, we’ve been researching coins from all over the world, and the theme that brings us all together in 2018, is the Armistice Centenary. A number of truly stunning coins have been released to mark the anniversary and below are some of our favourites, chosen from world renowned Mints around the world marking this important Armistice centenary anniversary.

Change Checkers have been voting for which coin shown below is their favourite, and the results can be found at the bottom of this blog.

The Peter Rabbit 50p coins were released back in 2016 to commemorate 150 years since Beatrix Potter's birth. At the time, nearly 10 million were minted, however, despite the millions in circulation, it seems that they are still sought after, attracting a lot of attention on eBay, with some reports saying they have sold for around £800! The Representation of the People Act 1918 was a landmark in British history, giving the vote to more people, including women. The 100 th anniversary of the Act was commemorated by the Royal Mint on the Representation of the People Act 50p in 2018. This is a nice item for anyone with an interest in history. History of the coin.

This £2 is the final coin issued as part of the First World War £2 series first issued by The Royal Mint in 2014. Issued earlier in 2018, the design by Stephen Raw features the words ‘The truth untold, the pity of war’, from the Wilfred Owen poem Strange Meeting. The words stand out of a mud-like background in the centre of this striking £2 coin, which was actually modelled in the clay taken by the artist from the Sambre-Oise Canal where Wilfred Owen died in 1918.

To honour the sacrifices of all those who have risked and continue to risk their lives to protect our freedom, a UK £5 coin was issued by The Royal Mint. The coin features a design by Laura Clancy on the reverse symbolic of the resilient and determined poppies that grew amidst the chaos in the valley of the Somme and colour printing has been used to highlight the vibrant red in the poppy design. This coin stands as a poignant reminder of the brave men and women who have lost their lives or have been injured in conflicts past and present.

This 50p was chosen by the Isle of Man Government to commemorate the First World War Armistice Centenary. As a special acknowledgement to the sacrifices made by the 1,165 Manx men who lost their lives in the war, a specially minted coin featuring distinctive red poppies was presented to each child in full time education on the Isle of Man. Cupro-Nickel versions of the coin without the red poppies went into general circulation. The new coin features ‘The Manxman’ from the top of the Douglas War Memorial and the words ‘Their name liveth for evermore’.

In October this year, The Royal Canadian Mint unveiled these finely crafted $2 coins issued to remember the sacrifices of Canadians who fought for freedom during WWI. Just 3 million coins have been minted – two million of a stunning coloured version and one million of the non-coloured coin, both of which have been released into circulation in Canada. The reverse image by artist Laurie McGaw features a soldier’s helmet in the centre to represent the many lives lost during WWI and the large poppy beneath it is inspired by the Canadian poem ‘In Flanders Fields’ by John McCrae, who died in combat in January, 1918.

More than 4 million men and women from the United States served in the First World War and so to commemorate the centenary of World War I and honor the American soldiers, this Proof Silver Dollar has been issued. The obverse design is titled “Soldier’s Charge” and depicts a soldier gripping his rifle, with the words, “LIBERTY,” “1918,” and “IN GOD WE TRUST.” The reverse design is titled “Poppies in the Wire,” featuring poppies mixed amongst brutal barbed wiring.

The 2018 Armistice 50 cent coin follows the Anzac coin which was minted in 2015 to mark the centenary of New Zealand’s efforts in WW1. Designed by Dave Burke, the reverse of this 50 Cent features a coloured red poppy flower surrounded by a wreath and the three silver ferns on the wreath represent the three services of the New Zealand Defence Force: Army, Navy and Air Force. The 50-cent coins were released into circulation in New Zealand but were actually struck by The Royal Canadian Mint, where all 10, 20 and 50 cent coins are currently minted for New Zealand.

Released by The Royal Australian Mint, the new $2 Armistice coin serves as a tangible and visible reminder to all Australians of the fight for freedom 100 years ago. Designed by T Dean and developed with the assistance of the Australian War Memorial, the coin features the number 100 to signify the important Armistice Centenary Anniversary, and the centre zero features a red coloured poppy. The coin features a ‘C’ mintmark, meaning the coin has been struck at the Canberra Mint and is a stunning keepsake in this centenary year.

Issued by La Monnaie de Paris (The Paris Mint), this €2 coin features a cornflower, asymbol of remembrance in France. This dates back to WWI as soldier’s uniforms were blue and these flowers, as well as poppies, continued to grow in land devastated by war. The flower also symbolizes delicacy and innocence.

The Magyar Nemzeti Bank in Hungary paid homage to the heroic efforts and the sacrifice made by Hungarian soldiers by issuing a 2,000 HUF collector coin. The dominant design featured on the obverse shows a section of a world map with Europe as the centre and starred settlement names in boxes where the most significant battles took place involving Hungarian soldiers. The reverse depicts a scene from the trenches, showing trench warfare and the tragedy of war, as well as the heroism and comradery of the soldiers.

The Solomon Islands have issued this limited edition 1 dollar coin featuring a cluster of vivid red Remembrance poppies against the Union Flag background. The reverse design has the important centenary dates and the words ‘LEST WE FORGET’. As a commonwealth country, the reverse of this coin features the Queen’s portrait.

Each coin pays its own historic tribute to this significant anniversary marked by millions of people around the world. Change Checker’s voted for their favourite of the stunning coins above, and the results are now in, with the UK Remembrance Day £5 coming in first place, followed by the Solomon Islands $1 and the Isle of Man First World War Centenary 50p.

Which 2018 Armistice coin is your favourite?

1918 Representation Of The People Act 50p

This year marks the centenary of Armistice, arguably the most important military anniversary to be celebrated in British history.