The quality of blackjack games in Las Vegas has declined over the past 15-20 years. The availability of strategy information over the internet has forced casinos to drop some of the more liberal rules. Casinos first started hitting on soft 17. Some stopped offering surrender or re-splitting aces in shoe games.

While some Las Vegas casinos offer terrible rules on blackjack these days, there are still several places where a good game may be found. Some are even on the Las Vegas Strip, although some of the better ones are located downtown and in the locals market. All of the games mentioned below pay 3:2 on a blackjack.

A $100 six-deck table in high limit has the same rules as the $5 game but stands on soft 17. This game may require reservations with a host to ensure it is open.

Treasure Island is another great Las Vegas Strip casino for blackjack. Players will find $10 games with great rules at Treasure Island. The shoe games offer surrender, re-split aces, and double down after splitting. These tables start at $10. Double deck starts at $15. Those tables allow double down after splitting. These low limit games hit soft 17.

Sahara spreads good $15 3:2 blackjack. Players can double down on any two cards and after splitting in the blackjack pit at Sahara. The dealer hits soft 17. This game is offered in the high limit salon for $50 where the dealer stands on all 17’s. This game adds surrender and re-split aces to the rules.

Caesars properties that spread 3:2 blackjack under $25. Bally’s, The Cromwell, Paris and Rio deal $10 or $15 3:2 eight-deck blackjack during slower hours. This game allows double down after splitting and surrender. The Cromwell and Rio also have $15 3:2 double deck game. Double down before but not after splitting is allowed. Otherwise, all other Caesars Entertainment 3:2 blackjack tables start at $25. It takes $100 to get a stand on all 17 game.

El Cortez offers the best blackjack game in downtown Las Vegas. It is a single deck that pays 3:2 on a blackjack. Players can double down on any two cards and the dealer hits soft 17. The minimum bet is usually $10. Be careful in this game as the pit bosses will sweat large action or bet spreads. El Cortez also has $10 double deck and six-deck games for $10. These tables allow double down before and after splitting.

Downtown Grand offers the best shoe games downtown. For a $5 minimum, players can double down after splitting, re-split aces and surrender. The double deck game with double down before and after splitting starts at $10. Low rollers will find an even money $1 blackjack table at Downtown Grand. The pit is open Thursday through Sunday.

All regular blackjacks pay 3:2 at Plaza. Plaza deals a $5 or $10 six-deck game with double down before and after splitting. The double deck game gas the same rules. It has a $25 minimum bet.

The competition in the off-strip blackjack market is fierce. Players will be able to find shoe games that start at $5 where double down after splitting, surrender and re-split aces are allowed at Cannery andEllis Island.

Aliante and Station Casinos have $5 or $10 3:2 blackjack games with surrender but not re-split aces. Club Fortune, Silverton and Tuscany have re-split aces instead of surrender for $10. South Point has $5 3:2 six-deck tables with double down before and after splitting. A $3 table with a continuous shuffle machine at Jerry’s Nugget has the same rules.

Station Casinos properties offer double deck blackjack where players can double down after splitting. It is $5 at Boulder Station and Santa Fe Station and $10 at the others. M Resort offers the same game with a $15 minimum. The dealer hits soft 17. Suncoast, The Orleans, Gold Coast, South Point and Silverton also spread this game. The minimum bet is usually $10 at these tables. A $5 version of this game is dealt at Jerry’s Nugget.

Some locals casinos have a high limit salon with stand on all 17 blackjack tables. M Resort has a $50 minimum with double down before and after splitting, surrender and re-split aces. Green Valley Ranch, Palace Station, Red Rock and Rio have the game for $100 with surrender but no re-split aces.

The 21+3 side bet is optional, and its size does not need to be the same as the main bet. In order to play the side-bet, you need to participate in the main hand.

Placing a bet in the 21+3 square is all you need to do to participate. As soon as the deal is made, and before any player takes any actions the 2 player cards and the dealer’s up-card (or only card in European Blackjack) are compared to the pay table.

There are several variations of 21+3 payouts, the most simple pays from a ‘flush +pair’ and up, with 9-to-1 payouts in each case. When pairs are also included, this is hit more often, so the prizes are lowered to reflect this. There are 3-to-1 for all hands (pair, flush, straight, trips and straight flush) or there are staggered pay tables.

When the prizes are staggered, a straight flush or better can win significant money. Here is an example:

Keep in mind that depending on the pay table, the house edge can get as high as 13% for this side bet. You can find examples of games (depending on the number of decks in use) where this is around 2.78% instead.

It goes without saying that knowing the correct basic strategy of the base game is a prerequisite here. Without this you are just handing money to the house. 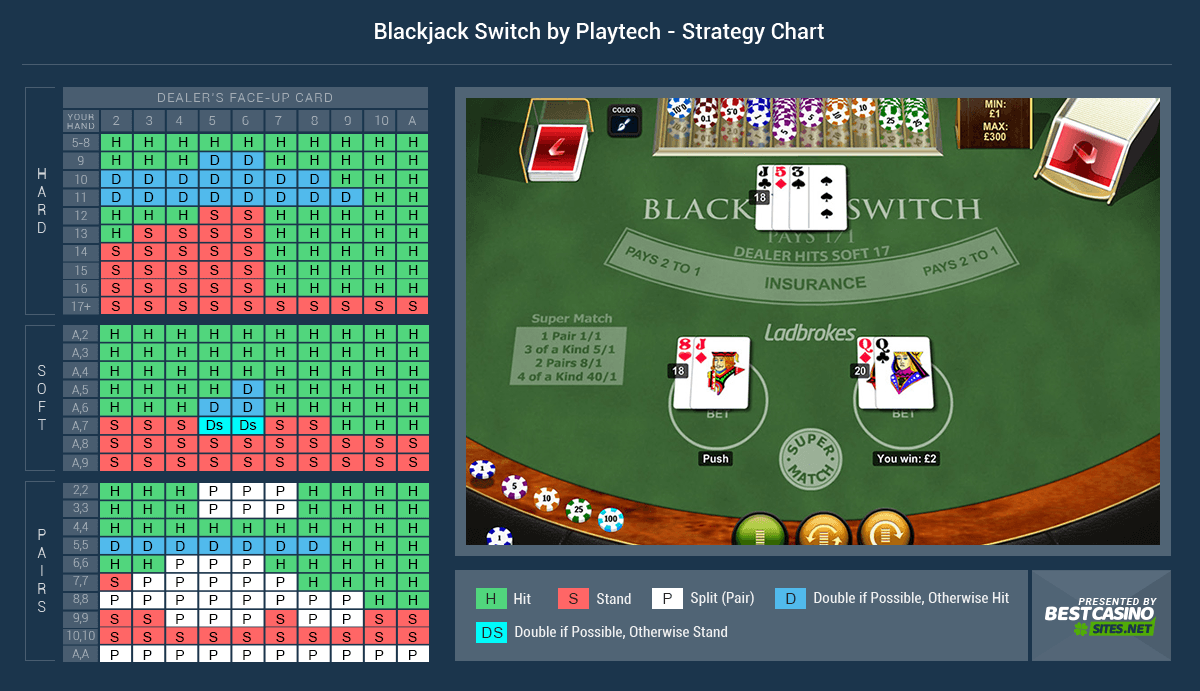 Your main ‘strategy’ decision over the long run with the 21+3 side-bet is whether to play or not. The house edge is bigger than in most base games. If you know this, then you get to decide whether the added interest and entertainment (and chance of a windfall win) are worth it to you. If the extra engagement from the 21+3 bet works for you – then you can simply add a little to your bankroll to cover this.

Card counters can beat this game by memorizing the suits as they are dealt. It is possible on some deals to find one suit over-represented as the shoe gets smaller – turning the edge positive for players. The expected hourly rate for this is very low compared to other forms of counting. Online the deck is shuffled after each hand, making card counting impossible.

Pros and Cons of 21+3 Blackjack

Adding a poker style hand to blackjack makes for an interesting variation – though I do wonder whether ‘purists’ in either discipline would approve! Depending on which of the pay tables you use there is the chance of a 9-to-1 or even bigger windfall. That elusive suited 3-of-a-kind (paying 100-to-1) would certainly be memorable.

Whether you participate depends on your attitude towards side-bets in general. Luckycharmbingo. Some players like these bets, and are happy to pay the extra house-edge for the chance of the occasional big win. Others scorn these bets as long-term losers.