When the term “donk bet” first began to appear in the world of poker, it was a decidedly negative term. It was used to describe bad plays made by unskilled players. Since then, the term has evolved to describe a specific type of bet that isn’t necessarily bad. Not only that, the donk bet has become accepted as a part of the game of no-limit Hold’em which, when used correctly, can be an effective tool in the arsenal of even top professional poker players.

So What Exactly Is A Donk Bet?

The “donk” in donk bet is short for donkey, which, while not quite as popular as the word fish, is often used to describe a bad poker player. So the phrase donk bet is derived from donkey bet.

In modern poker terms, a donk bet is used to describe a bet coming from someone sitting out of position who was not the aggressor in the hand preflop. An example would be if someone sitting on the button raised preflop and the big blind called. After the flop, if the big blind makes a bet, it would be called a donk bet. This player is out of position and the button player was the one showing aggression preflop.

It should be noted that the term applies to all streets of a poker hand, not just the flop. You will often hear players say, “He donk bet the turn”, or, “He donked the river.”

In many cases, this type of play is going to be a mistake. Most experienced players will tell you that throwing out a bet against an opponent that has already shown aggression when you’re out of position is not a good idea.

There are times, however, when a donk bet can prove to be a good strategical move.

When And When Not To Donk Bet

What Is A Donk

To understand when you should or shouldn’t consider using a donk bet as a strategical tactic, you need to consider the action preflop and what it indicates about the range of hands that each player could be holding. You should also think about your table image and the playing style of your opponent. 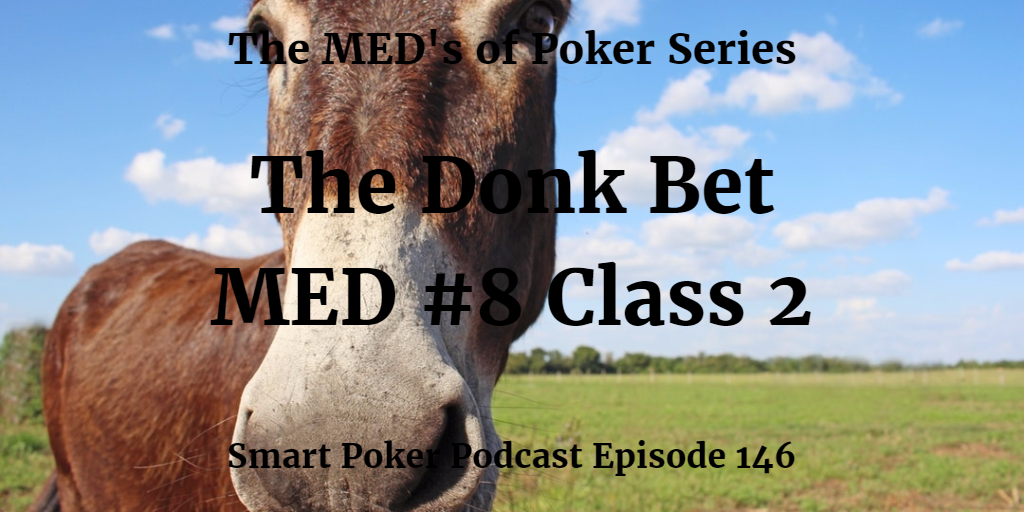 Assuming two players are involved in the hand, the player who is in position and bet first preflop is presumed to be holding a stronger range than the preflop caller. The preflop aggressor will usually have strong pairs, mixed broadway (above 10) cards, suited aces, suited kings, etc. The caller would tend to have smaller pairs, smaller suited connectors, and perhaps some of the lower end of the broadway connectors. Sky spirit 777 9x wings fold how.

When You Shouldn’t Make A Donk Bet

When cards on the flop hit the range of the preflop aggressor, it’s not a good idea to throw out a donk bet. No matter what your intentions are, it’s really counterproductive.

If the flop connects with your opponent’s range, bluffing is not a good idea. In this case, your opponent will only fold complete air and will either call or raise with everything else.

If the flop connects with your opponent but you’ve landed a strong hand like a set, straight, or flush, a donk bet risks folding out your opponent’s bad hands and denies him the chance to bluff and put more money in the pot. If he hit a good pair or overpair, he’s also going to keep betting anyway, so you might as well just let him keep going and call him down and then raise the river (provided that the board isn’t dangerous for your hand).

Either way, you’ll end up with more money in your stack by avoiding any temptation to make a donk bet when the flop connects with your aggressive opponent.

When A Donk Bet Can Be Effective

A donk bet can be effective when the flop hits your perceived range, especially against weak-tight players (nits).

Many weak-tight players who are holding unpaired cards and missed the flop will get very uncomfortable when someone donk bets into them. They will assume you’ve hit a pair, a set, or two pair and simply fold.

A donk bet can also be effective to “price yourself in” on a draw against an opponent that rarely raises but often makes continuation bets. For example, if you end up with a good flush draw and an overcard on the flop out of position, you could bet an amount small enough to make sure you are getting the right odds to go after your draw instead of letting your opponent set the price and possibly kill your odds.

There are also some combinations of cards that can fall on the flop which will hit the caller’s range extremely well and couldn’t possibly do anything to help the raiser’s range. In these cases, a donk bet prevents the preflop raiser from checking behind and getting a free chance to realize the equity of his cards. In other words, you’re not giving your opponent the chance to take free cards and hit something like a pair of aces or kings.

Is The Donk Bet Part Of Your Poker Strategy?

What do you think of donk betting? Do you use the donk bet as part of your own strategy? What do you do when someone donk bets into you? Let’s talk in the comments below!

If you’re looking for more poker strategy, check out the Enhance Your Edge YouTube Channel. You can also catch the team live on Twitch and Discord!