EuroMillions jackpots start at a minimum of €17 million and have a cap of €210 million. The jackpot reached its previous cap of €190 million on four occasions - in August 2012, Adrian and Gillian Bayford of Suffolk, UK, became the first players to win the game's maximum prize, before a Portuguese player from Castelo Branco matched the achievement in October 2014. In October 2017, a Spanish player from Gran Canaria became the third player to win €190 million. In October 2019 the EuroMillions jackpot completed a run of 22 consecutive rollovers, including five draws at the jackpot cap. The €190 million jackpot was finally won by a single ticket holder from the UK, making it the fourth time that the maximum amount had been won.

The record amount of €200 million was won by a single ticket from France on Friday 11th December. Because the cap was reached and won, it now increases to the current mark of €210 million. This €10 million increase will happen following each time the cap is reached, up to a maximum of €250 million.

The participating EuroMillions countries are Austria, Belgium, France, Ireland, Luxembourg, Portugal, Spain, Switzerland and the UK. Draws are held in Paris on Tuesday and Friday evenings.

This EuroMillions data includes all draws up to and including Friday 5th February 2021. The last EuroMillions draw number was 1396. You can use the EuroMillions checker to automatically see if your numbers have won a prize.

In January 2006 a rollover cap was introduced, which meant that the top prize could roll over for a maximum of eleven consecutive draws. If the jackpot was still not won in the twelfth draw, it would then roll down to be shared between players in the next winning prize tier.

In November 2009 the rule was changed and the EuroMillions jackpot cap was introduced. The cap was originally set at €185 million and was first reached in July 2011. At the time, the rules stated that once reached, the cap would increase by €5 million.

In May 2011 the Tuesday draw was introduced, along with a prize for matching just two main numbers. In addition, the Lucky Stars ball pool increased from 9 to 11.

The EuroMillions jackpot cap rule changed again in February 2012, which meant that the cap would no longer increase by €5 million every time it was reached but instead would remain at the set €190 million.

In September 2016, the game’s matrix changed, with the ball pool for the Lucky Stars expanding from 11 to 12. Starting jackpots were increased to €17 million, and a new European Millionaire Maker game was introduced. The cost of a ticket rose to accommodate the changes.

More changes were made in February 2020, with the jackpot cap pushed up to €200 million. The new rules that were introduced state that when the cap is reached, it can remain at that fixed amount for a maximum of five consecutive draws; if there is still no jackpot winner in that fifth draw, the top prize will roll down to be shared between players in the next winning prize tier. The cap will also increase by €10 million after each time it is won in future, up to a maximum of €250 million.

The jackpot cap of €200 million was won in December 2020, meaning that the first €10 million increase took place and now sits at the current cap of €210 million. Once this amount is hit and won, it will increase to €220 million.

There are a number of supplementary EuroMillions draws held in the majority of the participating nations, solely for the players in that country. These include the Ireland Only Raffle, Spanish El Millón, Portuguese M1lhão, Swiss Super-Star, Swiss Second Chance, Belgian My Bonus, Luxembourg Joker and Luxembourg Extra Lux.

Launched as Millionaire Raffle by Camelot - the UK’s National Lottery operator - in 2009, Millionaire Maker offers one prize of £1 million in every EuroMillions draw and is exclusively offered to UK players.

October 2014 saw the game change its name to Millionaire Maker to signify the introduction of non-cash prizes to supplement the £1 million prize in special draws held on the last Friday of the month as part of the Mega Friday promotion. In September 2016, Mega Week was introduced, offering extra prizes of £1 million as well as luxurious non-cash prizes in the last full week of every month.

Millionaire Maker codes consist of four letters and five numbers (e.g. ABCD12345), with one code issued for every UK EuroMillions ticket purchased. To win, players must match the exact code on their ticket with the one drawn. There were previously two Millionaire Maker winners of £1 million in each draw before changes were made in January 2019. These updates, brought in my Camelot, also saw the announcement of more special events with the crowning of more millionaires over the course of a year.

The Ireland Only Raffle generates ten winners of €5,000 in every draw. Introduced in September 2016 as part of the recent changes to EuroMillions, entry into the game is included in the EuroMillions ticket price, with one unique code generated for every line played.

Draws take place twice a week, on Tuesdays and Fridays.

Available to those EuroMillions players based in Spain, €1 million can be won in Friday draws.

All players who enter the EuroMillions draw are eligible to play El Millón, regardless of whether they’ve entered for the Tuesday or Friday draw. To win, you need to match the code generated on your ticket with the one drawn.

EuroMillions players in Portugal play M1lhão on Friday evenings, when a prize of €1 million is on offer. 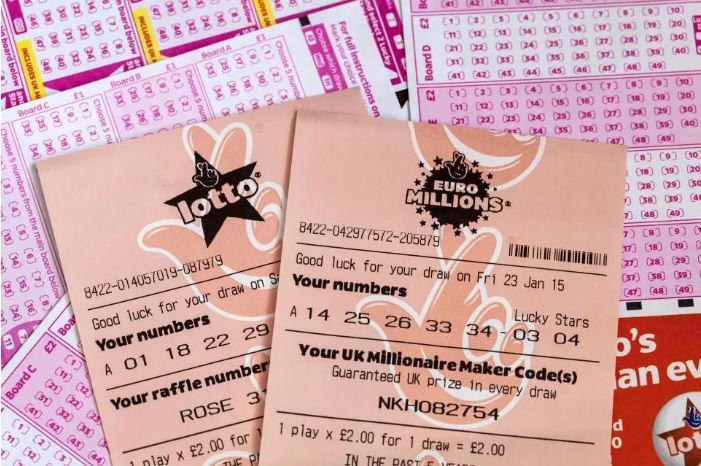 Super-Star players have the chance to win the jackpot of CHF250,000 by matching a five-digit code, which contains three numbers and two letters.

The winning combination is drawn at the same time as EuroMillions and is played on the same entry slip as the main game, but players can take part in Super-Star separately if they wish. There are nine prizes on offer in every draw, with the value dependent on the number of digits matched.

The prize breakdown is shown in the below table:

The five main numbers on players’ EuroMillions tickets are entered into the additional draw, and prizes are given for matching three, four or five balls.

The estimated jackpot of CHF150,000 is achieved by matching all five numbers, with four numbers winning approximately CHF700 and a prize of CHF25 for matching three balls.

If no player matches all five numbers, the prize fund is allocated to those who have matched three or four numbers.

Exclusive to those who play EuroMillions in Belgium, My Bonus players can win prizes ranging from €10 up to €500.

My Bonus codes begin with the letter ‘B’ and contain four letters and five numbers. They are automatically assigned to a player when a EuroMillions ticket is bought.

There are 600 winners of €500 on a weekly basis – with 200 claimed in Tuesday draws and 400 on a Friday. Additional draws are held occasionally, offering multiple €10 prizes.

The code is also used as a player’s entry into European Millionaire Maker, which generates prizes of €1 million.

Luxembourg Joker takes place alongside the main EuroMillions draw, and ticket holders in the country can win prizes worth up to €500,000 in every draw. Players pay an additional €2 to add a line of Joker to their EuroMillions entry.

Six numbers between 0 and 9 are generated on each line, and the €500,000 jackpot is won by matching all six numbers drawn in the same order.

The prize breakdown is:

Players who enter EuroMillions in Luxembourg are automatically entered into the Extra Lux, a separate draw that offers their main numbers from the pan-European game another chance to win.

Matching all five numbers secures a prize of €100,000, with a €500 prize for matching four numbers and €10 for matching three balls.

Extra Lux was introduced in September 2016 as part of a number of changes made to EuroMillions.

European Millionaire Maker was introduced as part of changes to EuroMillions made in September 2012. The game works in a similar way to UK Millionaire Maker, but players from all nine participating countries can take part. Players will receive a four-letter, five-digit code for every EuroMillions line they play. The first letter of the code will identify the country in which the ticket was sold. Draws are held from time to time throughout the year.

EuroMillions HotPicks was launched in the UK in January 2018 as a new game that could be played separately from the main draw at a cost of £1.50. Players can decide whether to pick one, two, three, four or five numbers, but must match all the numbers they select to win the associated prize. The numbers used for EuroMillions HotPicks are the five main numbers drawn in the main game, with the Lucky Stars discounted. Prizes range from £10 for Pick 1 to £1 million for Pick 5.

The prize breakdown, and how to win, can be seen in the following table:

Irish EuroMillions players have been taking part in EuroMillions Plus since June 2007. Super lucky casino slots favorites. For a small additional fee, ticket holders have a chance of winning prizes ranging from €20 to €500,000 in a supplementary draw. To win the top prize, the five main numbers on a player’s ticket from the main EuroMillions draw must match the five drawn from a separate EuroMillions Plus machine, with rewards starting for matching just three of the five numbers drawn.

February 2014 saw the French version of EuroMillions increase the price of tickets to include automatic entry into the new My Million game, which guarantees to create at least one winner of €1 million per draw. To accommodate the new game, the cost of a French EuroMillions ticket rose from €2 to €2.50.

My Million is very similar to its UK counterpart Millionaire Maker. For every line played, participants receive one code and win by matching it with the code drawn. There are no prizes awarded for a partial match.

See the latest EuroMillions results to find out if you are a winner. The numbers for tonight or the most recent draw are shown below, along with the winning Millionaire Maker code. Select the prize breakdown button to find more information about the Euro lottery results, including the number of winners.

View more EuroMillions numbers below. Select a date to get all the details from that particular draw.

Go to the EuroMillions results history page to access a full archive of previous winning numbers. All prizes in the UK are valid for 180 days after the draw date.