It won't go away

All 2p coins minted before 1982 should say 'new pence'. Those made after this date should say 'two pence'. However, a limited batch with the words 'new pence' managed to bypass final checks,.

The 2p rumour is still doing the rounds. A man telephoned the other day (January 2005) asking what I would offer for a few 'Extremely rare' 1970's Twopences with 'New Pence' on the back. For some reason I found myself actually being polite to him, and I turned him down fairly gently and then revealed the truth. Updating this now in 2015, I still get the odd call about them!

For those of you that are still not aware, I'm likely to turn nasty soon, so please read what I wrote on the subject back in June 2003:

I have been getting quite a number of enquiries regarding British two pence pieces (2 pees). It seems on Thursday 26th of June 2003 and then again on Thursday 6th November 2003, a Television Programme (Trading Treasures, BBC1 late morning/lunch time viewing) stated that certain Two Pence coins with the words 'New Pence' on the reverse are valuable.

To save more people writing in to ask me if the coins they have in their pockets are worth in excess of £300.00 and not the face value 2p, please let me put things straight..

The British 2p was introduced at decimalisation in 1971. Because all the coins were new the Royal mint put the words 'New Pence' on the coins. The coins remained with this wording until (and including) 1981. The back of all Two pence pieces dated between 1971 and 1981 will look like this:

In 1982 the Royal mint decided that the Two pence piece was not really that new anymore and replaced the word 'New' with the word 'Two'. They also did this with the other denominations that were introduced in 1971, the 'New Penny' became 'One Penny', and so on.. So now from 1982 to now the back of the Two pence coin looks like this:

Without any exceptions all of the 1982 coins had 'Two Pence' on the back. However, and this is where the confusion comes from, in some years of the early 80's no Two pence coins were issued for general circulation and the 637,100 1983 dated coins that were produced all went into special sets containing one of each coin from that year. In a few of those sets the 2p coin was struck with the older ('New Pence' type) reverse by mistake and is indeed very rare.

The 1983 2p Coin with 'New Pence' on the reverse is the only rare coin, all of the others are very common and were struck in very high numbers.

From 1984 to 2003 all of the coins without exception have the 'Two Pence' reverse like they should.

So far, from the emails I have received I can now account for quite a few of the extremely rare 2p's! One chap even told me he had found 6! Now as far as I can work out the odds of finding just one of the rare 1983 2p's are 1 in over 14,000,000 going by the mintage numbers alone, the fact that all the 1983 coins went into sets, not circulation, decreases those odds even further! So to find 6 in your copper jar should be a one in 6,300,000,000 chance (six thousand, three hundred million (or 6.3 billion if you prefer counting the incorrect American way)). Now my maths is a little rusty, so please correct me if I'm wrong.

How can this be? Has a powerful wave of hope, misunderstanding, the ability to pay 6 months of mortgage repayments for 12p, the inability to find this page on my site (which has been linked from the front page since June 2003!) and perhaps just a little ignorance created a buzz across the nation?

A buzz so powerful, and resonating at just the right frequency that it was capable of changing the structure of solid bronze, turning millions of normal 2p's into 1983 2p's with New Pence written on them? No! Hope, no doubt has played a part in causing hundreds of people to email me and offer me their twopeneth worth, but the fact this programme seems to have been mis-understood by so many has now prompted me to contact the BBC to get a copy of it, watch it and find out if it does give a wrong impression, and why it was repeated again 4 months after its first showing!

Info: Proof coins are specially struck using different techniques to normal coins and as a result have a mirror like appearance and are usually only produced for year sets.

Lustre is the 'shine' you get on coins when new. It gradually fades from handling and cannot be brought back even with polishing (and you should never polish coins)

Has this been useful? If so, please put a comment in the Forum. 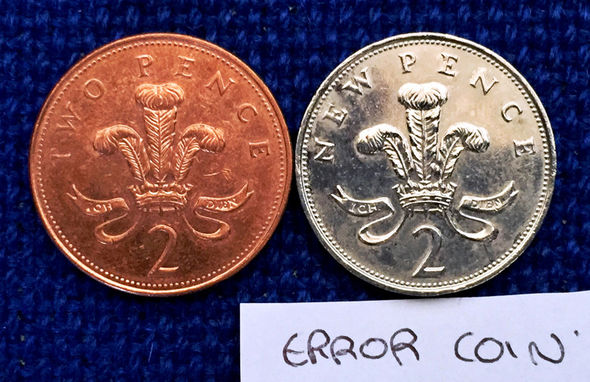 The government has ruled out scrapping 1p and 2p coins, despite launching a consultation into the use of cash. And if you’re among the 60% of people who immediately save, lose or even throw out pennies you receive, think again – these small coins can be worth more than you think.

Launched on Tuesday, the government’s consultation will consider the mix of denominations in circulation, with a particular focus on whether pennies and £50 notes are still being used effectively by the public.

Which? looks at the debate over pennies and £50 notes, and highlights the rarest and most valuable among these denominations.

Could 1p and 2p coins be scrapped?

During the Spring Statement, the Chancellor of the Exchequer announced a consultation into the use of cash and digital payments in the UK market, including whether little-used denominations – including pennies and £50 notes – are meeting the public’s needs.

Six in 10 penny coins are used once in a transaction before ‘leaving the cash cycle’ – meaning they’re saved or lost, according to the consultation paper. In 8% of cases, the coins are simply thrown in the bin. To compensate, the Royal Mint produces around 500m new pennies each year.

Yet charities warn that smaller organisations rely on pennies for collection buckets and coin drives, and many pensioners still deal primarily in cash.

Less than 24 hours after the consultation was announced, Downing Street confirmed it had no plans to axe 1p and 2p pieces.

Commons leader Andrea Leadsom said in response to a question: ‘I think it’s safe to say that the penny has dropped: we’ve considered change, we know we like change, so we think we will probably keep change and have no change.’

While scrapping the penny is off the table in Britain, other countries around the world have previously taken this step – Australia withdrew its one- and two-cent coins from circulation in 1992, while Canada did so in 2013.

What are the most valuable 1p coins?

Unlike other coin denominations, the design of pennies tends to stay the same over the years, meaning there are fewer sought-after collector’s items.

In 1933, the Royal Mint had such a large stockpile of pennies that it wasn’t necessary to mint more. Less than 10 pennies were struck with the 1933 date, with the majority going to Royal Mint records or buried under new buildings as part of a tradition.

With such a small mintage, this coin is unlikely to turn up in your spare change.

A more common find is the 1971 ‘new penny’. These coins are from the first run after decimalisation was introduced, when Britain switched its standard to 100 pennies in the pound.

A 1971 penny could fetch a premium, with one recently selling for £5.99 on eBay. But be wary – while others are listed at up to £75, there is no guarantee that anyone would pay this amount.

You should also be on alert for misleading claims by coin traders, a Which? investigation revealed, with some companies encouraging misconceptions about which coins are considered investments.

Much like 1ps, the design of 2p coins has been largely the same over the years. Still, it’s worth taking a second look at older 2p coins.

From 1982 onwards, coins were stamped with ‘two pence’ instead of ‘new pence’. But a minting error in 1983 meant some coins were accidentally stamped with the old-style wording – creating an ‘error’ or ‘mule’ coin.

But it’s worth keeping in mind that coins lose value once they’ve been in circulation. A circulated 1983 1p error coin recently sold for £25 – significantly less than the coins in ‘mint condition’, though still a tidy profit on its face value.

While pennies are in the headlines at the moment, the most collectible coins tend to be 50ps.

Coin enthusiasts know to keep an eye out for the Kew Gardens 50p. With just 210,000 in circulation, each of these can sell for over £150.

Another highly sought-after release is the Sir Isaac Newton 50p, but you won’t find it in your spare change. This coin is only available from the Royal Mint Experience in Llantrisant, Wales – and you’ll need to strike it yourself.

Currently these coins are selling for around £40 on eBay.

The Royal Mint has also released a series of Beatrix Potter 50p coins, that have proven popular among collectors and Peter Rabbit fans.

Will £50 notes be withdrawn?

The future of £50 notes is currently uncertain.

The consultation identified the fifty as a currency that’s rarely used in transactions, and associated by the public with money laundering and tax evasion. Asked about the future of a £50 note, a Downing Street spokesperson said considerations were still underway.

Latam 777 seatguru. Visit LATAM Airlines 777 For airlines that want to win on the world stage and grow now, the 777 family offers flagship status and more growth potential than the competition, providing a clear path to a successful future. For your next LATAM Brasil flight, use this seating chart to get the most comfortable seats, legroom, and recline on. SeatGuru Seat Map LATAM Brasil Seat Maps.

In recent years, £5 and £10 notes have been replaced with polymer designs – and an updated £20 note is due in 2020. By contrast, there are no plans underway to update the £50 note, with the Bank of England saying it will make a decision ‘in due course’.

For collectors, the value of banknotes often comes down to the serial number.

Many collectors seek out the first notes in a series – indicated by a serial number starting with AA01.

The lower the number, the higher the value of the note. Most notes with serial numbers below 30 are presented to dignitaries, and any number lower than 200 is likely to be in high demand.

Other collectors are willing to pay a premium for the first or last note series signed by a chief cashier. Alternatively, certain sequences of numbers – for example 12345 – can also attract collector interest.